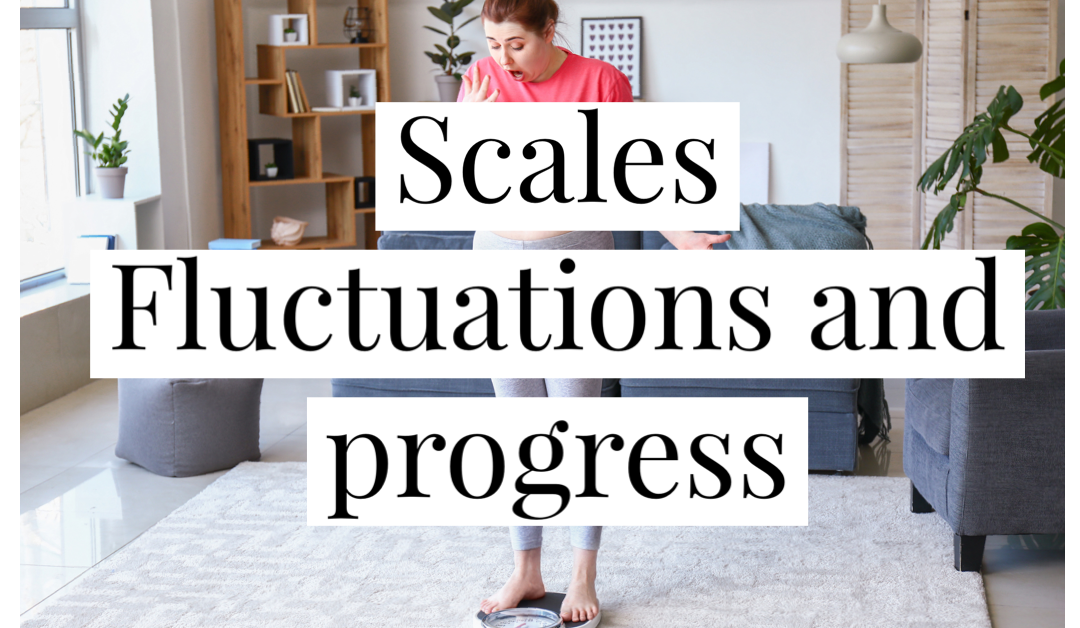 Your dieting, it’s going well, your adherence is high, and you stand on a scales only to see the number has gone up……very frustrating……but it doesn’t have to be! If you understand fluctuations and know they are expected this may increase your likelihood of successful fat loss.

Does a hike on the scale number automatically mean you’re not progressing? No.

When the scales go up you’ve failed your diet? No.

The scales measure your body mass; which is (from an anatomical tissue component perspective) made up of muscle, bone, skin, blood, organs and fat. Of these, the shorter-term variables are blood, muscle and fat; and of these, the common acute variable is (the chemical content of) water.

Let’s take a look at 7 variables that can cause fluctuations and as such impact the scales.

Hydration status has a great impact on our bodymass and can cause acute changes in bodymass.

The most practical example of this is to weigh yourself before and after a workout with high sweat rates and you will see an acute loss – which comes from fluid loss.  A common approach in weight-categorised sports (1) is voluntary dehydration, performed to try lower weight acutely to make the cut-off point for weigh-ins pre-competition.

Perhaps you are eating out and getting a meal which due to the cooking process has higher levels of salt than you would typically consume, this salt can contribute to potential increased thirst and fluid retention which can contribute to acute increases in bodymass.

Salt/sodium has an important role in rehydration (fluid retention), for this reason, it is included in most sports drinks and rehydration strategies (2).

A lot of athletes in weight-categorised sports will lower salt (salt restriction) intake to reduce bodymass for weigh-in or conversely athletes will go to moderate intakes of salt to enhance fluid retention before an event, salt loading (3).

Let’s say, it’s the weekend and you’re just concerned about kcal intake and you’ve had a much higher intake of carbs the day before a weigh-in (and no training done to deplete the glycogen) you’ll notice an increase on the scales because of the associated water required to store carbs.

Bowel movements or lack of (i.e. constipation vs diarrhoea)

When we eat food, we consume the food’s mass and as part of the digestive system, one of the final phases is the intestinal passage.

A function of the large intestine is to reabsorb water and electrolytes, the longer the stool is in the colon the more water is absorbed.

Constipation, which is < 3 stools/week or > 3 days between bowel movements, is a reduced frequency of bowel movements and as such can contribute total body mass via the added intestinal weight (5)

Conversely, diarrhoea is the frequent passage of loose, watery stools and as such causes a higher loss of fluids which can induce dehydration (6).

If you’ve had a stomach bug or infection that resulted in diarrhoea then you may have heard advice like “plenty of fluids”, this is to rehydrate as you are most likely dehydrated if you were unable to replace the fluids lost through diarrhoea.

Exercise-induced muscle damage (EIMD) can cause inflammation and a rise in associated total body water (7) and water retention (8). This effect can be exacerbated by increased intensity, hot environments, and dehydration.

Wait, what? How is dehydration adding to water retention levels?

During dehydration a series of physiological reactions occur, which increases the hormone renin which activates the renin-angiotensin-aldosterone-system (RAAS); this initiates the process of maintaining fluid, electrolytes, and blood pressure.

In studies of endurance sports, researchers found that a rise in aldosterone levels, which reactively enhance sodium absorption, promote fluid retention and can often mask the magnitude of bodymass losses in these events.

Stress can be a strong influence on our hormones and psychological stress (just as physical stress above) can cause an increase in water retention (9).

Psychological disturbances / emotional stress has been shown to cause increased water retention via increased cortisol (10) and aldosterone (11), which as above can have a significant role in the regulation of fluid balance.

It has been well documented that some women can see an acute bodymass increase attributed to water retention, particularly during the late luteal phase, where pre-menstruation syndrome (PMS) can occur for women who experience it.

The luteal phase, the end of a cycle/just before a new cycle (i.e. beginning of a menses) has been shown to activate the renin-angiotensin-aldosterone system (RAA) during rest; therefore, it is possible to cause body fluid accumulation (13, 14). Studies have also shown that sodium and water reabsorption is enhanced when both estrogen and progesterone are present together (15,16).

The level of water retention can significantly vary from person to person.

Takeaways (No, not those ones!)

You can see that these variables are dynamic and can impact changes in bodymass levels, via water, in different ways. A key takeaway is to understand that these fluctuations can be expected and not to throw the towel in with the first weigh-in you see an increase in bodymass.

Another key takeaway is each weigh-in is a data point to be included in the overall identification of trends and trajectory forming, which can be a better indication to the effectiveness of your fat loss phase being implemented as opposed to looking at progress solely based on weigh-in to weigh-in.

As a valuable datapoint, the scales should be used in conjunction with other objective measurements such as circumference measurements, body fat estimations (using callipers and if so, the sum of all, as well as individual, skin-fold trajectory) and pictures (where you should aim to control variables such as light, camera height, distance to the camera, same clothing, etc).

It’s also very useful to gather subjective feedback such as stress, sleep, hunger, adherence and the next expected menstruation date. These data points will better help you determine if you are progressing at an appropriate rate and inform decision-making.

Want help with your goal?

Which program is for me

We use cookies on our website to give you the most relevant experience by remembering your preferences and repeat visits. By clicking “Accept All”, you consent to the use of ALL the cookies. However, you may visit "Cookie Settings" to provide a controlled consent.
Cookie SettingsAccept All
Manage consent

This website uses cookies to improve your experience while you navigate through the website. Out of these, the cookies that are categorized as necessary are stored on your browser as they are essential for the working of basic functionalities of the website. We also use third-party cookies that help us analyze and understand how you use this website. These cookies will be stored in your browser only with your consent. You also have the option to opt-out of these cookies. But opting out of some of these cookies may affect your browsing experience.
Necessary Always Enabled
Necessary cookies are absolutely essential for the website to function properly. These cookies ensure basic functionalities and security features of the website, anonymously.
Functional
Functional cookies help to perform certain functionalities like sharing the content of the website on social media platforms, collect feedbacks, and other third-party features.
Performance
Performance cookies are used to understand and analyze the key performance indexes of the website which helps in delivering a better user experience for the visitors.
Analytics
Analytical cookies are used to understand how visitors interact with the website. These cookies help provide information on metrics the number of visitors, bounce rate, traffic source, etc.
Advertisement
Advertisement cookies are used to provide visitors with relevant ads and marketing campaigns. These cookies track visitors across websites and collect information to provide customized ads.
Others
Other uncategorized cookies are those that are being analyzed and have not been classified into a category as yet.
SAVE & ACCEPT